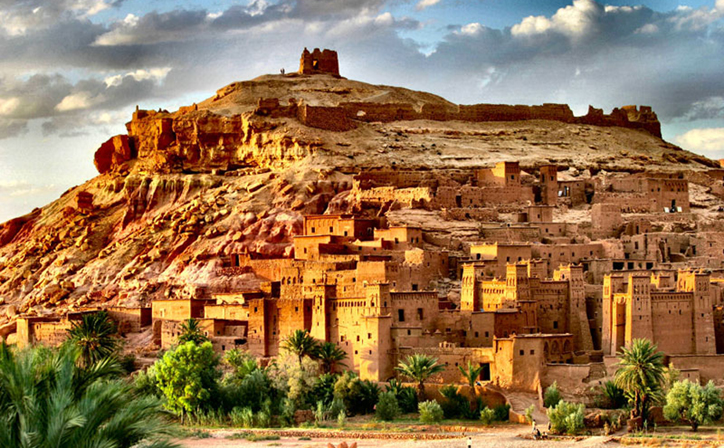 Duration: Full day 12 hours Departure: 6 am (3h30 drive per way) We invite you to discover the history and drama of ancient Morocco. Cross the Tizi-n-Tichka to reach Ait Ben Haddou, a well-preserved kasbah World Heritage Site by UNESCO. Continue to Ouarzazate, where films such as "Lawrence of Arabia", "Star Wars" and "Gladiator" were filmed. Enjoy a panoramic view of the old Kasbah Taourit. Just after breakfast, travel comfortably in the Atlas Mountains and cross the Tizi-n-Tichka top of 2260 meters. While your little group goes to the Sahara desert in taking the old passage caravans from Marrakech, your guide will give you information on the history and tell you stories about this fascinating region. You will arrive at Ait Ben Haddou after a journey of three hours and see its impressive Kasbah complex, or castle, a World Heritage Site by UNESCO. The well-preserved architecture of Aït Benhaddou appeared in numerous films, such as Jesus of Nazareth, Star Wars and Babel. Continue for 33 km still to Ouarzazate, located at the edge of the beautiful Sahara desert. This popular tourist city houses the Atlas Film Studios, the largest film studio in the world. Many famous films, including Lawrence of Arabia, Gladiator and The Mummy, as well as episodes of the television series Game of Thrones have been shot here. Stop for lunch at a local restaurant (Not included ) and get a fantastic view of the old Kasbah Taourit, a palace of 300 rooms. Then, go in the afternoon to explore the Atlas Film Studios and the Cinema Museum (at your expense). Take home for Riad grawa when the sun begins to slip towards the horizon. You will arrive around 19h00 - 20h. ➢ Highlights: - Professional Guide - Visit a World Heritage site listed by UNESCO and one of the most authentic places in Morocco

Day trip to Ouarzazate - Ait Benhaddou
You May Also Like