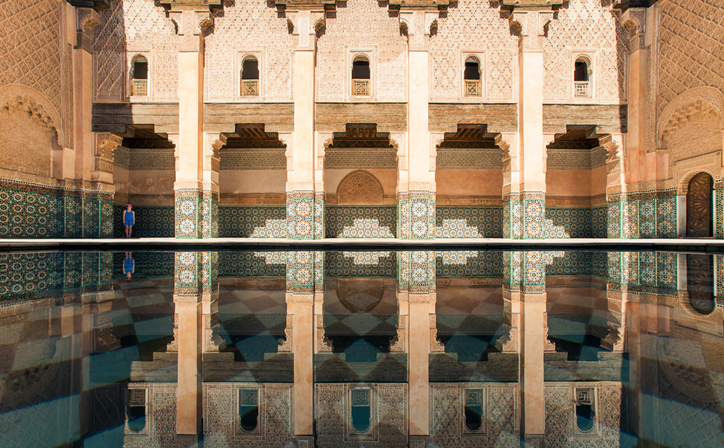 Welcoming, assistance by a TCG staff member and transfer to the riad. (included)

Start your day by visiting the must see monuments in Marrakech:

- Koutoubia mosque: Five times a day, one voice rises above the Djemaa din as the muezzin calls the faithful to prayer from the Koutoubia Mosque minaret. Excavations confirm a Marrakshi legend: the original mosque, built by Almoravid architects, wasn’t properly aligned with Mecca, so the pious Almohads levelled it to build a realigned one. When the present mosque was finished by Sultan Yacoub El Mansour in the 12th century, 100 booksellers were clustered around its base – hence the name, from kutubiyyin (booksellers).

- Majorelle garden: The Jardin Majorelle in Marrakech is one of the most visited sites in Morocco. It took French painter Jacques Majorelle (1886-1962) forty years of passion and dedication to create this enchanting garden in the heart of the “Ochre City”.

- Bahia Palace: The palace of Bahia (palace of the beautiful, the brilliant) is a nineteenth century palace of eight hectares located in Marrakech. It is one of the masterpieces of Moroccan architecture, one of the major monuments of the country’s cultural heritage and one of the main places of tourism in Morocco.

- Dar Si Said museum: The oldest museum in the city with the greatest number of works of art exhibited. The Museum is officially called the Museum of Moroccan Arts.
Like other palaces in Marrakech, Dar Si Said was originally residence of one of Morocco’s chief executives. In this case, it was the former house of Si Said, brother of the grand vizier of Marrakech, Bou Ahmed.
Dar Si Said is much larger than the Marrakech Museum. This museum takes up two floors and houses many more objects. It features antiques, arms, instruments and some of the oldest objects in Marrakech.

*Lunch is at the Dar Nejjarine restaurant

➢ Day 3: Half day guided tour to the souks, the Medersa of Ben Youssef and the Badii Palace (guide + transfers included):

- Medina souks: The commercial area of the Medina, is in the northern Jemaa El Fna, and it is a convoluted maze which is bound to confuse you but gets extremely interesting when you reach the centre. The wonderful network of souks also comprises a lot of shops and stores that you can explore.
Every street and section has its own speciality, from selling carpets and textiles to incredible antique doors. Shoppers appreciate the stunning hand-carved trinkets and ornaments. You can get soaps, medicines, spice and what not! This attraction reflects the true spirit of the city.

- Medusa of Ben Youssef: The Koranic school was founded at the beginning of the 14th century by the Moroccan monarch Abu el Hassan. Only with the reign of the Saadians who enlarged and redecorated the building in 1570, Madrasa became the largest Islamic college in the Maghreb. Region. Up to 900 students would have lived there to study law and theology. The monarchy supported them by providing food and lodging – the kitchen, however, had to be done by the students themselves. Madrasa Ben Youssef was transformed into a museum in 1960 and, since its renovation in 1999, it is one of the most popular sites in Marrakech. The bronze doorway at the entrance of the college, adorned with beautiful cedarwood and mosaic carvings, is an impressive masterpiece of its time.

- Badii palace: The El Badi palace (sometimes spelled El Badiî palace or El Badia, literally “Palace of the incomparable”) is an architectural ensemble built at the end of the sixteenth century and located in Marrakech in Morocco. Former palace, it was built by the Saadian sultan Ahmed al-Mansur Dhahbi to celebrate the victory over the Portuguese army, in 1578, in the battle of the Three Kings.
Today, there remains only a huge esplanade carved gardens, planted with orange trees and surrounded by high walls. Indeed, in 1696, the Alawite sultan Moulay Ismaïl took what was richest in this palace to build the imperial city of Meknes.

➢ Day 5: Transfer to the airport:

Assistance and transfer to the airport included.


Marrakech tradition and culture package
Need Help?
We would be happy to help you!
+212 5 24 20 14 83
contact@travelconsultinggroup.net
You May Also Like

Discover the Valley of roses