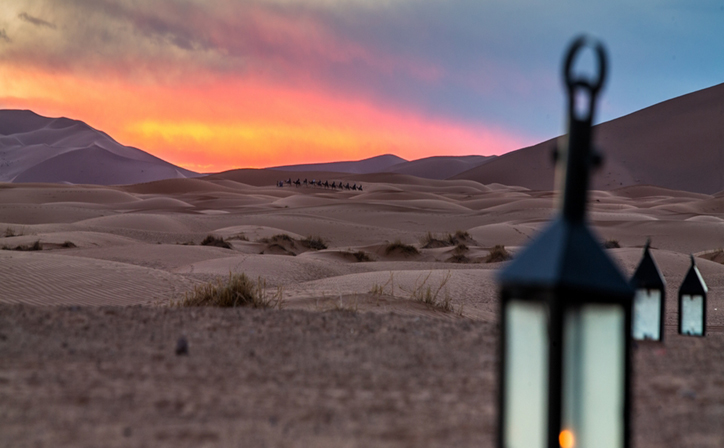 Kasbah of Ait Ben Haddou is a traditional Mud Brick city on the edge of the High Atlas Mountains. Listed on the UNESCO world heritage list and has featured in many films, mostly as a replacement for Jerusalem. It has appeared in a lot of movies, including The Mummy, Kingdom of heaven, Gladiator and Game of Thrones.
Once inside the Kasbah, you can only walk or climb. There are two main entrances, one can be reached by the new bridge. To reach the second, it is necessary to cross the river using the stepping stones (in dry season the river is completely dry).

- 17h00 / 17h30 (Optional): A little break to see the museum of cinema in Ouarzazate. It traces all the great movies produced there. 4 euros entrance fee.

- 08h00 / 11h30 Departure from the hotel to see the majestic gorges of Dades in a four hours drive with two coffee breaks.

• Todgha gorges:
A canyon in the eastern part of the High Atlas Mountains in Morocco, near the town of Tineghir.. Both the Todgha and neighbouring Dades Rivers have carved out cliff-sided canyons on their final 40 kilometres through the mountains. The last 600 metres of the Todgha gorge are the most spectacular. Local people live in the area and can be seen with their small donkeys or herding camels and goats.

- 20h00: Dinner with a beautiful fully starred sky then a traditional music and dance performed by nomads.

- 07h30: Breakfast then departure to Riad Madu or hotel Tombouctou.

- 07h00: Breakfast then departure on a straight drive to Marrakech, with two/three coffee breaks on the road and lunch (Coffee breaks and lunch not included).

- Transfers to and from the airport
- HB accommodation in Riad Madu or Hotel Tombouctou and in the tents
- The transportation is done with a shared minibus - Private transfers to the Sahara on demand.

Discover the Moroccan Sahara
Need Help?
We would be happy to help you!
+212 5 24 20 14 83
contact@travelconsultinggroup.net
You May Also Like

Discover the Valley of roses