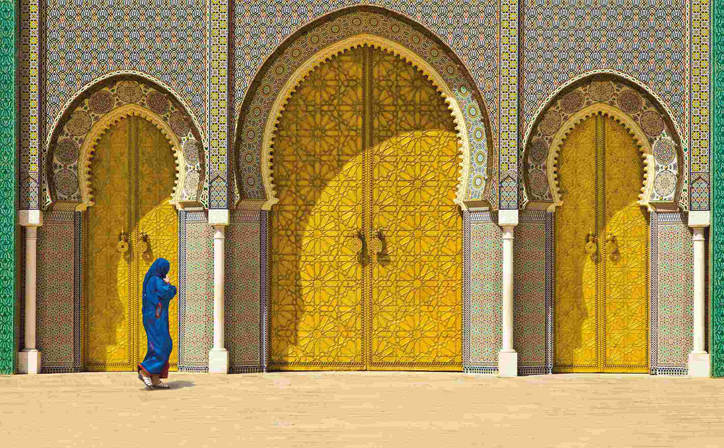 Greetings then transfer to the Oriental Medina Riad & Spa or similar

Pick up from the riad for a four hours drive to Casablanca. Upon arrival, you will visit see the Hassan II Mosque and experience the coastal “Cornish” seaside. Afterwards, departure to Rabat, the capital of Morocco!

After breakfast, historical guided visit: Kingdom Palace, Mausoleum of Mohammed V the grandfather and father of the present king are buried here, Hassan Mosque, a wonder of the medieval Moorish world with its great minaret left unfinished when its founder died in the Chellah necropolis, Kasbah Oudaya. Departure To Chefchaouen.

Discover more about the ‘Blue Town’ for every shop selling tourist gifts; shoe repairs, groceries, stationery and sweets, a tailor sewing an elegant djellaba, butchers, bakers (one of the centers of life in each area) although candle-stick makers don’t seem to have survived – Moroccan life as lived by the people of Chaouen. And don’t ignore the new town, which has some lovely examples of Andalusian architecture and a charming park at the end of Avenida Mohammed V.

After breakfast, departure to the Roman ruins of Volubilis, a UNESCO World Heritage site. The city was built with 20 gates, more than 50 palaces and 15 miles of surrounding walls. Following lunch, stop at the remarkable Roman ruins of Volubilis, with its mosaics and temples. Later we go ahead to Meknès, the 16th century capital whose ruler, Moulay Ismail, modeled himself on France’s ‘Sun King’, Louis XIV: historical guided visit of Meknès. Night in Fez.

All day devoted for visiting Fez, the oldest of the imperial cities, home to the world’s first university dating from the 9th century and one of the most complete medieval cities in existence, founded in 790 A.D. Seeming to exist somewhere between the Middle Ages and today, the Soul of Morocco stimulates the senses with its visual details, haunting sounds and rich aromas. Guided visit of medieval Medina, Karaouine University, Medersa Attarine, Kingdom Palace, Ben Danan synagogue, souks.

After breakfast, direction to Merzouga, visit of Midelt, providing wonderful views of the peaks of the High Atlas Mountains, and Er-Rachidia, a modern urban center. Arrive in Merzouga in the afternoon and check-in hotel or experience the Bedouin life for special night under the tent at Merzouga sand dunes. The night sky with thousands of stars is the unforgettable time in your life.

Perhaps make the most of your time in the desert with an early-morning walk over the dunes to enjoy the sunrise. After having breakfast, ride your camel back to Merzouga and meet your driver. There, hop back aboard your minibus and head to Ouarzazate through Alnif, Tazzarine, Nkob, and the Draa Valley.

Morning sightseeing in Ouarzazate, gateway to the South, includes a visit to the Kasbah of Tifoultoute and the School of Handicrafts, where you can view silver jewelry, pottery, stone carvings, and wool carpets created by local crafts workers. Stop in Ait Ben Haddou, a picturesque ksar (fortified stronghold) decorated with geometric patterns. Later, take an afternoon drive to Taroudant along the fertile Souss Valley with a stop in Tazenakht to view its luxurious carpets. Arrive in Taroudant for your overnight stay.

Entire day in medieval Taroudant, a town encircled by spectacular 20-foot-high ancient red walls, with battlements and fortified towers. Constructed of reddish earth, it turns to hues of gold, pink and orange at dusk. Olive and orange groves, eucalyptus and palm trees thrive all around town, and the peaks of the High Atlas Mountains rise up to the north. Visit the colorful souks and silver markets.

Early departure for Essaouira stopping for lunch on the way at the luxury seaside resort of Agadir, where pink flamingos watch as children build sandcastles and sunbathers delight in the rhythm of the lapping waves.

Explore this old Portuguese fishing port with its 16th century harbor walls and 18th century French-designed fortifications and colorful houses. The main entrance to the harbor is through the Porte de la Marine, built in 1184 and decorated with two columns of a classical triangular pediment. A sandy bay sweeps to the south of this enchanting town, and wooded hills dominate the eastern skyline.

After breakfast, head to your hotel in Marrakech.

The 15 days grand morocco tour still give you sensation for discovering Marrakech “the red city of Morocco”. We will ensure that you will see the most important sites of historical and cultural interest, including the Majorelle Gardens, the Koutoubia Tower, the Saadiens tombs, the Bahia Palace. After having lunch at a restaurant near the square, you will walk through the souks “traditional market” and explore hundreds of handicrafts. Afternoon, you will have some free time to look around by yourself the other parts of the city.

Airport transfer according to your departure flight